Young people’s trust, confidence and support of charities in Scotland

This briefing presents and analyses the findings from a survey of the general public in Scotland on trust, confidence and support of charities. The key findings are based on a telephone survey of 1,088 respondents (adults aged 16+) commissioned by SCVO and conducted by Ipsos MORI during 27th Nov and 5th Dec 2017. The data for young people (16-24) is based on 121 interviewees, with a weighted sample equal to 155. The 2017 results are compared against the 2015 SCVO/Ipsos MORI poll and other data sources where relevant. 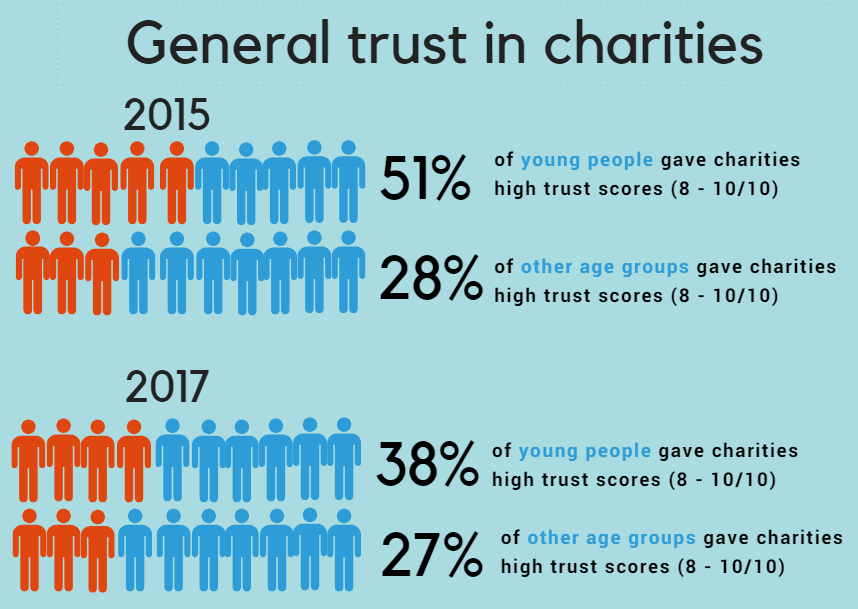 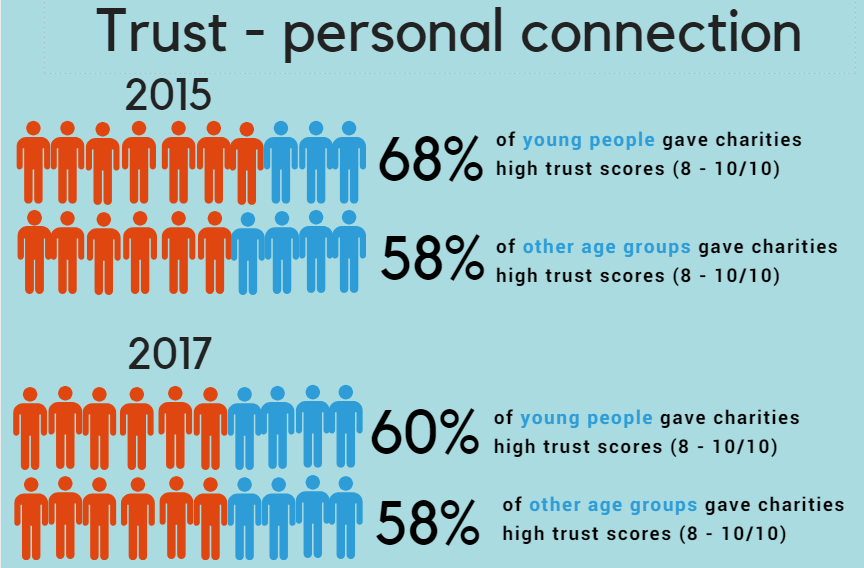 When asked about those charities they have a personal connection with, young people gave slightly higher scores than older people, but the gap between the age groups is small and shrinking.

In 2017, 60% of young people gave charities they have a personal connection with high scores (between 8 and 10/10), compared to 58% in other age groups. Young people’s trust has dropped slightly from 2015 levels when 68% gave top scores – while the other age groups saw no drop in trust.

Further, in 2017, 22% of older people gave the charities they had connections with the top score of 10/10, against only 12% of young people, who tended to give marks around the 8/10 and 9/10 mark. The lower figures around personal trust may be due to young people using less services than people in age groups 25-34 and 35-54; alongside other issues such as negative media stories or personal experiences. 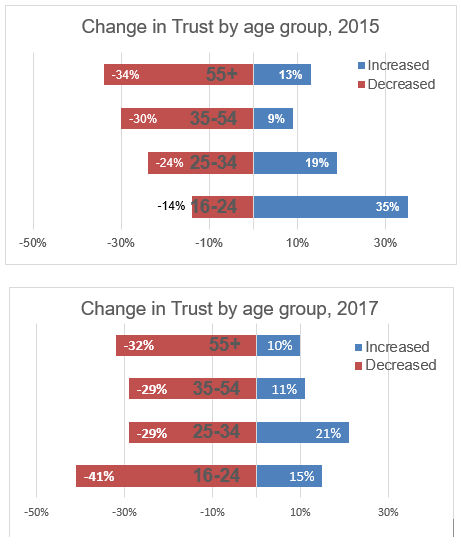 In 2017, 40% of young people agreed that recent stories in the media had made them lose confidence in charities – this is a 14% increase from 2015. In all other age groups the reported influence of negative media has gone down (see figure below).

Young people are now the second most likely age group – after those aged over 55 – to say that negative media stories have made them lose confidence in charities. 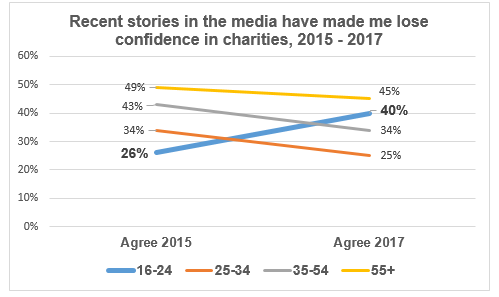 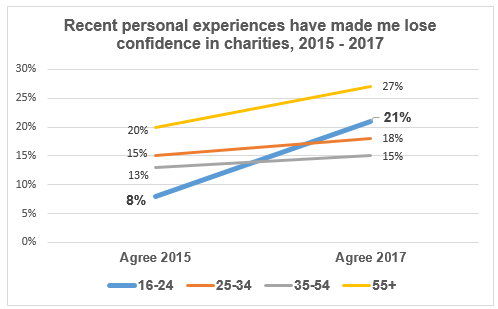 We have seen a drop across all age groups in the number of people agreeing that charities are trustworthy and act in the public interest – and disappointingly young people have shown the largest drop, from 85% to 73%: 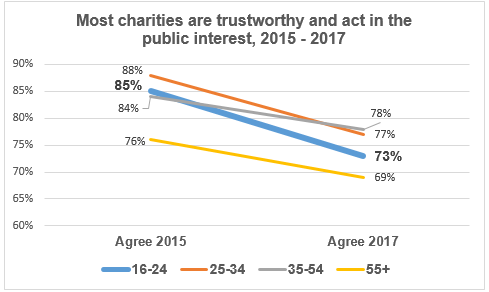 Interestingly though, young people are still more likely than other age groups to ‘Strongly Agree’ that charities are trustworthy, which gives cause for optimism: 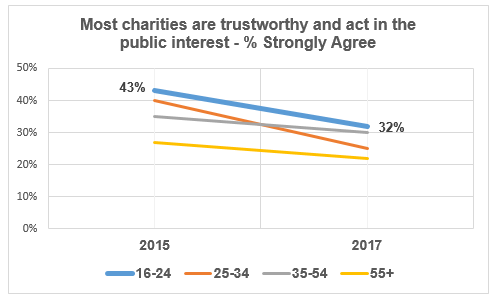 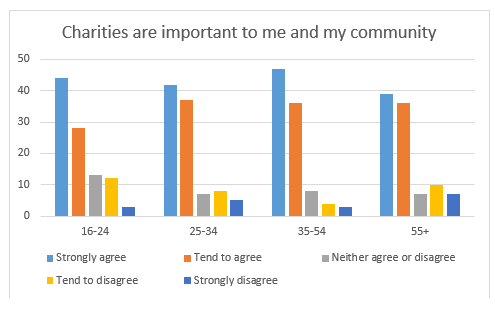 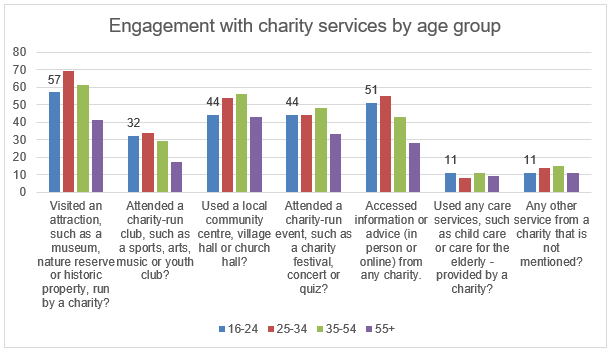 • While overall volunteering figures for Scotland have flatlined and are now even showing a decline, youth volunteering is going through the roof! Youth volunteering (under 16s) participation has grown to 52%, nearly double the adult figure of 27%
• Factors which have underpinned this growth in youth volunteering from 33% in 2009 to 52% in 2016 include ‘push’ and ‘pull’ factors, the jobs market, awards and recognition, and targeted support.

Younger people are less likely to donate money regularly than older people, with 26% donating ‘rarely’ and 57% donating ‘from time to time’. Young people are more likely to volunteer, sign a petition and take part in a public demonstration or protest, with nearly ¾ of young people signing a petition in the last year. 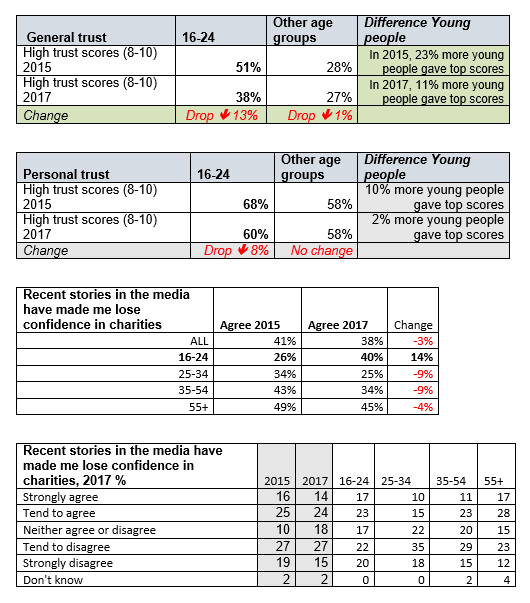 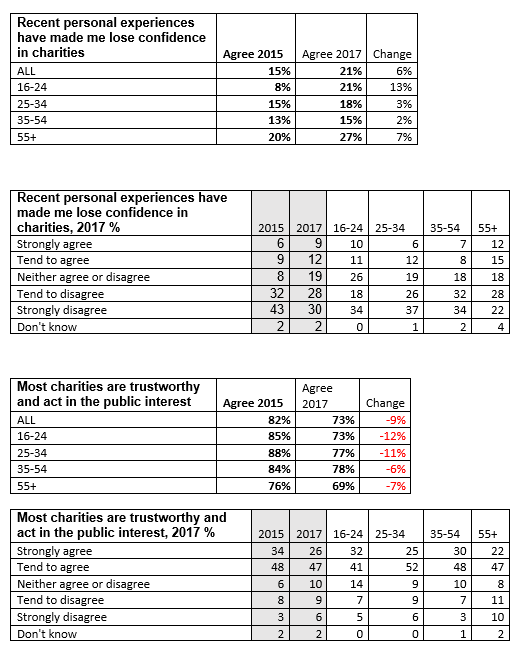 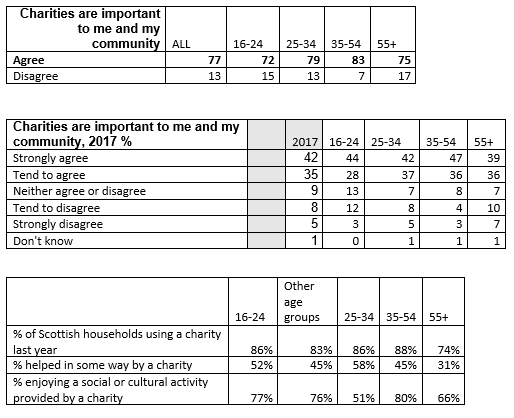